Cosimo Pantaleo, CA, on Pumping Gas and Being the Head of Finance (Pt. 1)

With a true entrepreneurial spirit, Cosimo Pantaleo CA defies the traditional labels of the accounting world.  He believes in maintaining work/life balance, while still advancing the goals of the companies he consults for. From Tax Manager, to small business owner, to North American Head of Finance, Pantaleo’s story is one heck of a ride.

You are not the traditional accounting personality, if there is such a thing. Why did you choose to become an accountant? I would love to say that from a young age I knew that I wanted to work with numbers (laughs).  The reality is that I chose accounting as a path because I did well in it throughout high school but also because I knew that I wanted a career in business. It wasn’t exactly a purposeful choice where I weighed the pros and cons of all of my options. In fact, because I had focused my undergrad on mathematics for commerce, I had to go back and  complete the required credit hours in accounting. It took me an additional 2 years over and above my undergrad.

The reality is that I chose it as a path because I did well in it throughout high school but also because I knew that I wanted a career in business.

Why did you choose KPMG for your first job? I chose KPMG because of the people. I was fortunate enough to have multiple offers coming out of school as a result of the early hiring process, which had me interviewing throughout the fall of my final year. Firms were heavily recruiting my entire class and by Christmas I had the difficult task of choosing where I wanted to work..  In the end, I connected most with  the people that I interviewed with at KPMG and so I chose  them to start my career.

I chose KPMG because of the people there… In the end, I connected most with the people that I interviewed with…

What was your time like at KPMG? KPMG was exciting and new and the people I worked with really made it enjoyable while working long hours. Obviously, I learned a lot about technical accounting and auditing, on route to obtaining my CA designation.  Working at KPMG helped me define my work ethic and I was able to transition into different roles while I was there. I started at KPMG in audit with the communication and entertainment practice. At the end of the third year I decided to join the  tax group. I worked in tax for a couple of years at KPMG and completed both parts 1 and 2 of the CICA In-depth Tax program and was promoted to manager.  Despite being a tax manager, I felt like I needed a change and wanted to take my career in a different direction, so I started looking at other jobs, but realized quickly that I did not find them very appealing.

Working at KPMG helped me define my work ethic and I was able to transition into different roles while I was there.

So you chose to leave accounting? The jobs that I was looking at did not appeal to me so, I started looking at business opportunities where I could start my own business or take on a franchise. That is when friends, who were already involved  with Imperial Oil, connected me with executives at Esso and before I knew it, I was offered a brand new On The Run ESSO station, with a 3600 square foot retail outlet, Tim Hortons and a car wash. The location was less than a kilometre away from home and it was  an opportunity for me to apply some of my accounting knowledge while building my business skills.  For some people the move would have seemed like a real risk, but to me it was simply this incredible opportunity that might come along once in a lifetime. How could I possibly say no to it?

For some people the move would have seemed like a real risk, but to me it was simply this incredible opportunity…

The business did well (it was actually the 3rd largest fuel pumping location in Canada) and it was great to be able to run my own business with a strong partner like Imperial Oil.  At the end of the day, however, I had realized all that I could from this opportunity and that it was time to move on.   So I sold and was ready for the next chapter of my life. .  It was a decision that my wife and I made together, as we did when we decided to take on this opportunity.

I grew up around entrepreneurs…It was a calculated risk, but I had watched family members take calculated risks in their own businesses and it made sense to me.

How did the experience of entrepreneurship shape you? That experience probably shaped me more than most others. During the time at the ESSO my wife and I started our family. Our Esso station opened December 2001 and  our oldest son was born in March 2002. During that time I was close to home and my hours were flexible even though it was 24 hours a day and 7 days a week, which gave me the opportunity to enjoy fatherhood with my new son. The freedom you gain as your own boss is a very rewarding part of owning your own business and it afforded me the opportunity to go home whenever I wanted and to take an active  part in my children’s lives.  I owned the station for 3.5 years and we sold it in April of 2005,  shortly after  our youngest son was born.

From beginning to end we did well and I am proud of the work that we did there. If you look at the business on paper, it may not appear to be very appealing or glamorous, but I saw it as a real life ‘MBA’.  I learned how to manage people, create marketing strategies, better understand customer service and many other business management skills I wouldn’t have learned at the firm– all in just a few years. It wasn’t just a financial opportunity.

Along the way I also began to recognize how valuable work/life balance is and this realization really defined me and shaped my personal beliefs and goals in my own life. As much as it was a career move to become an entrepreneur, fundamentally it was a life move as well. I broke away from the mold and the mentality and rational of the corporate firms that tell you that you need to work 16 hours a day in order to be successful.

If you look at the business on paper, it may not appear to be very appealing or glamorous, but I saw it as a real life ‘MBA’.

Visit our website on Friday to read Part II: Cosimo Pantaleo, CA, on Pumping Gas and Being the Head of Finance 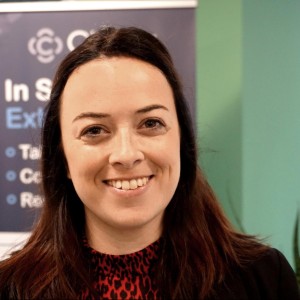 Aoife has over 5 years of recruiting experience and previously worked for a global search firm in Toronto and Ireland where she developed her expertise in the finance and accounting verticals. Aoife offers regular career, job search and interview advice directly to the independent consultants she serves.