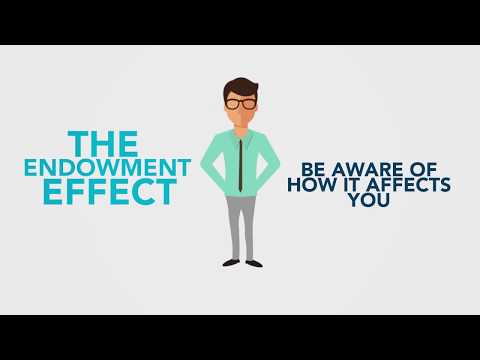 You have a friend who buys and sells antique and collectible cars. A car that they purchased 20 years ago for $5,000 dollars is now worth $100,000. Over the past two decades, your friend has invested time and money into the car. As you can imagine, this friend would be unwilling to part with their car for the current market price ($100,000), but what is more interesting is that they would also be unwilling to buy any additional cars at this price! What this means is that they have given their car an added level of value above and beyond the price of exactly the same car in the open market.

Welcome to the Endowment Effect.

The Endowment Effect is a psychological bias in which individuals assign more value to something simply because they feel a sense of ownership towards it. It is strongly connected to our fear of loss and can result in actions that are not always rational.

Research Question 1
At Clarity Recruitment, we were curious. Would the Endowment Effect translate into the world of accounting and finance hiring?

Our Research We interviewed 50 senior managers, directors, VPs and C-Suite members from financial and accounting firms in the Greater Toronto Area. We took care to capture data from various industries and levels. Each respondent was presented with scenario-based survey questions which focused on different hiring and staffing challenges. Scenario 1 Our finance and accounting hiring authorities were told that an employee they had hired was thinking of leaving. The hiring authority was then offered two choices:

a) Offer your current employee an incentive to stay (monetary, perks, benefits, promises,) or; b) Hire a new employee with exactly the same skills, salary requirements and intangibles (with no transaction costs).

Respondents were given a scenario in which they were asked whether they would incentivize (pay more) to keep an employee whom they had hired versus hiring a new employee with exactly the same skills and intangibles.

76% of respondents indicated that they would incentivize their hire to keep them.

This result, given the skill and intangible similarity of the two options, indicates an irrational willingness to pay in excess of what the market would demand.

Scenario 2
When a different set of respondents were asked to advise a friend about the same hiring decision (rather than making it themselves about their own hire), these numbers were reversed.

64% of respondents chose to replace the outgoing employee rather than incentivize him/her to stay.

In other words, the lack of attachment to the existing employee allowed the advisor to make the more rational, economically relevant decision. These findings match the results of other studies and demonstrate that the Endowment Effect is a psychological bias present in hiring and recruiting.

Why the Endowment Effect Matters When You’re Hiring
When a hiring manager’s willingness to pay/incentivize an employee rises (or when what is required for them  to accept another individual in the role increases beyond what is necessary for the position) there are a number  of  implications:

When a team member resigns, managers often make a move to counter-offer in order to retain their employee. When made using rational economic thinking, a counter-offer can be a legitimate and sometimes valuable move. However, in light of psychological research on inherent biases – particularly after losing someone that is a part of “your” team – chances are that psychological biases will negatively affect your decisions. In this specific case, you are negotiating from a psychological disadvantage, which is not really a negotiation at all. This means you are giving money away in an effort to regain mental control and soothe a psychological pain point. What’s more interesting is that the closer you are to that person, the more likely you are to escalate the counter offer irrationally, offering more than if you weren’t as close.

KEY LEARNING: Stop overpaying for things you don’t need. By understanding the Endowment Effect and how it affects you, you can make better decisions about when to counter-offer and when to simply let team members go. Companies expand role requirements beyond what the market will provide at a given salary

This type of over-hire can happen after you fall in love with a candidate and get your heart broken.

It looks like this… When recruiting for a new hire you meet a candidate who has all of the technical skills, interpersonal skills and intangibles you needed (or hoped for) and you are ready to get hitched…or hire them. You quickly park the other candidates still in the running as you wait to meet your candidate at the employment altar. The big day comes for the final interview and you get the dreaded call, “Sorry Doug, I’ve taken another opportunity and won’t be coming today.”  Your heart is broken and you pine for the person, benchmarking everyone you’ve met against him or her. Not a single one stacks up.  “I don’t need those other people, I need the person I wanted.” The other fully qualified suitors no longer seem like realistic options as you now think you need something more, even while the marketplace snaps up the others.  The position stays open for 2, 3,6, 8 months and your other team members, now overworked, begin leaving.

KEY LEARNING: You’ve put yourself in this mess and you could have avoided this long, cold winter of discontent if you only understood your own biases.  Companies will over-hire in an effort to replace an individual rather than hiring the right person for the role.

A team member you think is fantastic has outgrown her role and is moving to greener pastures. With no promotion to offer her, she is leaving with your blessing. As large as the loss may seem, the truth is that your team member wasn’t always the amazing, promotion-ready employee that she is now. She initially struggled and experienced the ups and downs of a new role when you brought her in, as most hires do. It took her a year to really figure out her role and then another 6 months to start driving the kind of outcomes that everyone had come to love her for. These last 12 months have been fantastic and you want to keep the good times rolling.  You just need to find another Manager of Reporting like her. One who can lead and empower and still dig into the nitty gritty. That’s what you need right? Wrong. Instead, you need the person who showed up 18 months ago. The employee you had for the past 12 months was overqualified, with too much horsepower. She was most likely bored, under-worked and was actively looking for a job. Bringing in a new hire like her, with her current capabilities, will inevitably lead to a repeat in the situation, incur the myriad costs of bad hires and lead to a lack of confidence in the hiring process and hiring manager.

KEY LEARNING: Our fundamental biases blind us to the objective capabilities and requirements necessary to effectively fill a role. By understanding these biases we can avoid making bad hires and better match employees with roles and maximize organizational efficiency.

What You Can Do About the Endowment Effect?
To help find a solution for the Endowment Effect, our study also tested whether the inclusion of a comparative metric (an annual evaluation or performance review from HR) could reduce this inherent bias by focusing on rational market factors.

We asked our hiring authorities about internally promoting an employee whom they had hired, versus one they had not hired, who had been given better overall scores on an annual review from HR (or other trusted scoring body).

• 66% of respondents chose to promote the employee they had not hired. The key consideration? When we asked them why, they cited the higher scores on the HR performance review as the difference maker. – This result indicates that the inclusion of an annual review injects a degree of objectivity into

the process and helps diminish the Endowment Effect.

•34% of respondents still chose to promote the employee they had hired and who had the lower performance scores.

– This result shows the enduring power of the Endowment Effect, as 34% still chose to promote the employee they had hired, even though he/she had the lower set of scores.